A day trip from Hanoi to the two famous traditional handicraft villages, including Van Phuc Silk Village will be a perfect trip to explore the traditional crafts of Vietnam as well as learn more about Vietnamese culture.

Van Phuc Silk Village is located about 10km from the legendary Hoan Kiem Lake. Up to now, it has been still remained the original features of an ancient village of Vietnam with age old banyan trees, wells and communal house.

For a long time, people have known the name of Van Phuc for its traditional sericulture, weaving and silk products. Visiting the village, tourists are surely attracted by various beautiful shirts, crafts, ties, dresses and many other items of Vietnamese silk. Particularly, the silk of Van Phuc is different from others since it is weaved by very simple looms, which is the genuinely traditional Vietnamese way of making silk fabric.

People say that silk has been considered as an extreme luxury, on par with rhinoceros horn, ivory and precious handworks in Vietnam for several centuries. It has long been a universal byword of luxury, which is often worn by the richest and most powerful citizens. Perhaps many people might wonder where the cradle of Vietnamese silk lies. Of course, Van Phuc Silk Village is proud to be the origin of Vietnam’s best silk and silk-making industry, dated back to the long-lasting history of more than two thousand years. Witnessing many ups and downs, the village’s silk craft has revived in order to meet the increasing demand for silk of both domestic and foreign markets.

Today, the fine and lustrous cloth that originates from the cocoon of the silkworm is more affordable to “ordinary” folk. Furthermore, silk is currently enjoying a fashion renaissance, particularly since its many varieties can be made into a wide range of designs suitable for all facets of modern life. Should you intend to have a silk pair of formal clothes made, just come here and select the materials that suit you, and professional tailors will bring you satisfaction!

Like other visitors to the village, you will be surprised at this “silk shop town”, where almost all houses along the paths have been turned into shops selling silk products. The village is now home to 1,280 households, with 90% involved in silk production and business. More than 2 million meters of silk are produced here each year. Most importantly, coming here offers you a good chance to explore the Vietnamese traditional industry of silk-making.

No tourists here are left discontented when they glimpse the variety of glistening silk products. They are always confronted with an initially bewildering array of silk items, from raw materials to garments, and a myriad of silk accessories. The local silk is known for its smooth and lightweight appearance, and of qualities that enable it to be dyed more colors to suit a variety of skin tones. In order to cater to the changing demands and tastes of customers, Van Phuc silk producers are expanding their silk and garment repertoire: traditional glossy, embroidered silks, double layers, wrinkled silks, and of course, more colors, hues and weights, for which they have invented new techniques in dying and thermo-processing of the threads.

If you are going to buy something from Vietnam to bring back as a gift for those at home, all types of silk and clothes made of silk of your choice are available in the village. Though the days when Vietnam’s silk was reserved for nobility are long past, what will never change is the sense of romance and luxury imparted by silk, a luminous type of cloth. With 2000 years of history behind them, the silk weavers of Van Phuc Silk village are still busy, weaving dreams.

A short trip from Hanoi to traditional handicraft villages will be a great chance for you to explore the silk of Van Phuc as well as the pottery of Bat Trang, two famous treasures of Hanoi.

How would you reach us?

How would you reach us?

40 – 45 minutes by taxi. Hanoi Youth Hostel provides private, door to door airport transfer service to and from the airport. Our airport transfer service is the most comfortable, reliable, great value for money prices and exceptional customer service. The fare for taxi airport transfer is now US $18.00 USD/4-seater car and US$ 23.00/7-seater car.  Please provide us your flight number, arrival time and your full names, Our driver will be waiting at the airport upon your arrival, holding a placard with your name on it – and bring you worry free straight to our door step. No hidden cost, no toll fee, no air conditioning charge, etc.  BOOK A TAXI NOW!

You can type Noi Bai International Airport to 5 Luong Ngoc Quyen Street, Hoan Kiem District, Hanoi into Google maps and it will give you a detailed map.

Ask Nguyen Huu Huan stop near Ma May Street. the Bus stop is 5 minutes walk away from Hanoi Youth Hostel.

In 2012 I visited Sapa in Vietnam and instantly fell in love. Sapa is a special place, nestled high in the mountains near the border of China, where the air is fresh and the views are breathtaking. 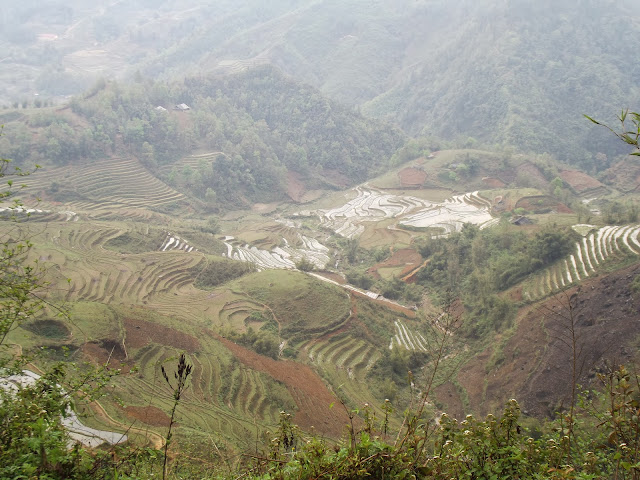 After spending time in Ho Chi Minh City and Hanoi, Sapa was the perfect place to escape the hustle and bustle. We did two days of trekking and were able to visit local villages along the way. Getting a glimpse into life in Sapa and the nearby villages was an eye opener. It was quite cold up in the mountains and many children did not have shoes or jackets and running hot water was non existent for many families. I felt very fortunate that night to go back to my hotel and have a warm shower – something that I take for granted everyday. 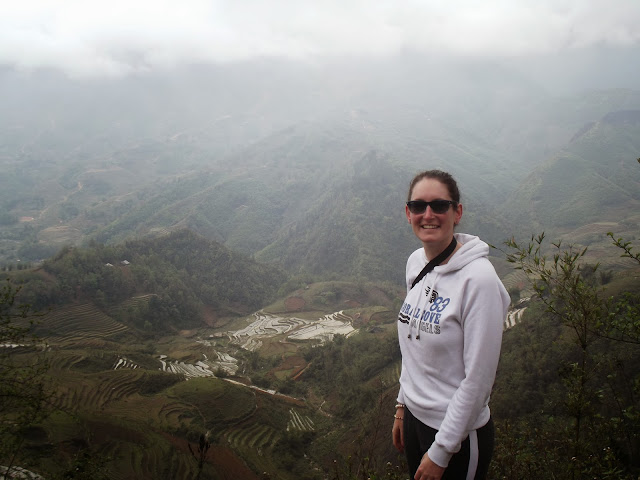 The people we met in Sapa were beautiful. They were gentle, kind and genuinely interested in what life was like for us in Australia. One of my favourite things about traveling is the interesting people you meet along the way. They stick in your mind and give you the warm and fuzzy feelings when you think back. 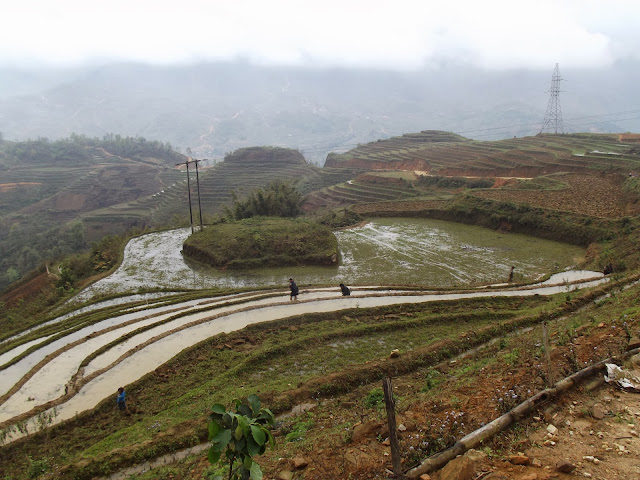 As a part of the tour we visited a local meat market. What an experience. I won’t post photos, but let’s just say as soon as I got home I hugged my dog very tightly. Again, an eye opener. 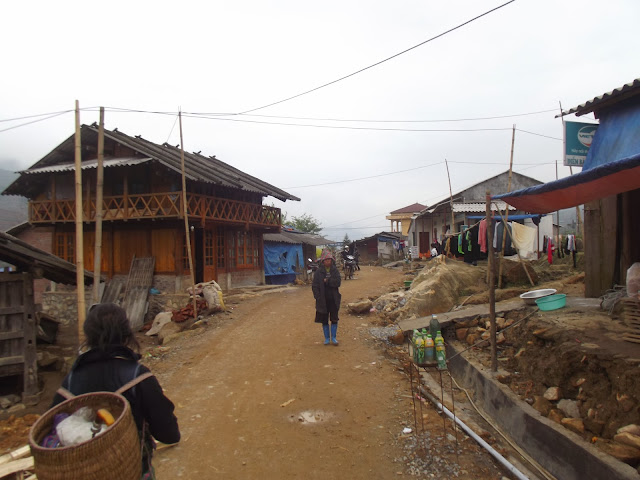 I would love to visit Sapa again. I even weirdly enjoyed the 10 hour overnight train trip there – it’s all part of the experience. 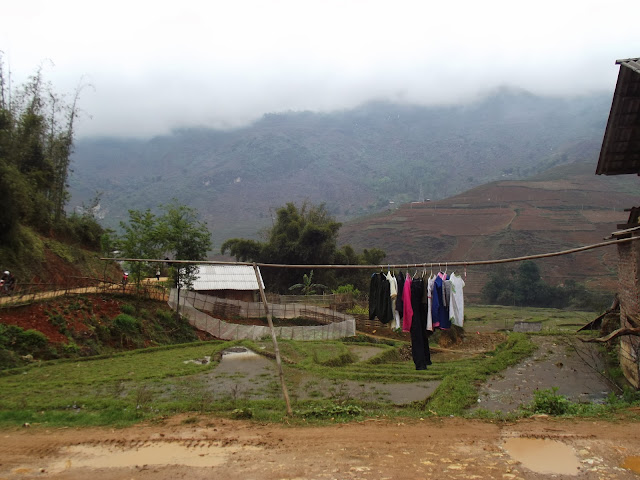 Have you ever visited Sapa? What did you think?

By COREY CHARLTON FOR MAILONLINE

These are the remarkable pictures of a young girl who tamed a fully grown wild elephant.

Kim Luan, who is part of the M’Nong ethnic group from central Vietnam, has now become inseparable from her pet elephant and the two are best friends. It is common in the M’Nong society to tame wild elephants before introducing them to the community and keeping them as domestic pets.The elephants are then used to work with the villagers in the fields, transporting goods and helping them build houses. Kim Luan (right) plays with her pet elephant, which helps to transport goods and work the fields The pair are at total ease with each other and the gentle jumbo happily lets her play around it. In Kim Luan’s (pictured) village in central Vietnam, it is common for locals to have a pet elephant

He said: ‘Elephants are considered members of the community – everything related to them must follow M’Nong traditions.

‘As a foreigner I was very surprised to see this bond but for the M’Nong minority group it’s common to have an elephant in the garden – just like we might have a cat.

‘I felt the respect between both. The girl was more scared of me than the elephant.’

The photographer has lived in Vietnam for seven years, capturing some 45,000 photos of the country.

But this is the first time he has witnessed such interaction between M’Nong and their elephants.

He added: ‘It’s not dangerous for her – the elephants are peaceful until you try to do wrong with them.

‘But M’Nong live in nature with elephants and know how to keep them quiet.

So you’ve already explored uber-cultural Hanoi, kayaked your heart out in Halong Bay and met with ancient hill tribes in Sapa – but there is still so much more to see and in northern Vietnam. A wealth of ancient temples, mysterious national parks and colonial fortresses await.

This city in the northwest of Vietnam is best known for its long-fought victory against the French colonial powers in 1954. The battle fought here culminated in the War of Independence, effectively signalling the beginning of the end of French rule. Around 500km west of the capital city Hanoi, Dien Bien Phu is a must for all history buffs, with many notable sight.  Scars of the war can still be seen within the Exhibition Museum, Him Lam Hill, Muong Thanh Bridge and the deeply moving Dien Bien Phu Cemetery. If short on time, make visits to both the A1 Hill and the fascinating Dien Bien Phu Museum top of your itinerary.

This is the oldest national park in Vietnam; established in 1962, this primary tropical forest lies about 120km to Hanoi’s west. The vast park covers parts of three provinces and the 22,000 hectares are teeming with a rich diversity of wildlife, including 300 different species of birdlife and 100 different types of mammals, alongside many fish, reptiles, insects and amphibians. The Cuc Phuong National Park is studded with deep mysterious cave systems which have long fascinated archaeologists. Searches have yielded fossils of reptiles, thought to date back some 200 million years. Come visit during the dry season which runs from November through to February; meet the Muong minority community who reside in traditional stilt homes, hike the trails and enjoy the peace and serenity.

Images of pristine Tam Coc will make you look twice; it has more than a passing resemblance to UNESCO listed Halong Bay, with its colourful landscape of karst rocks and river scenery. Tam Coc is much less explored, leaving the intricate caves and rock systems delightfully quiet.

High up in the enigmatic Nghia Linh Mountains lies the temples of the Hung Kings; the founders of Vietnam. Around 80 northwest of Hanoi, this area in Hy Lang is home to the complex of temples dating back to the 15th century. Located at various heights on the mountain slope, Lower Temple, Middle Temple and Upper Temple are highly revered. This is also the site of the annual Hung Kings’ Festival, Giỗ tổ Hùng Vương, which is held each year on the tenth day of the third lunar month.

Whilst many travellers head to the remote northern hill regions such as Sapa, there are other hilly gems, such as Mu Cang Chai which lies 1,000 meters above sea level. The landscape is typified by rice plantations balanced precariously on narrow terraced fields. This area is home to communities of H’Mong and Thai, who lead traditional lives. The lush rugged hills and valley are breathtaking and early morning mist bathes the landscape in an ethereal glow. This region attracts trekkers, eco travellers and keen photographers.