08:00: Hotel or private address pick up with our shuttle bus. Short break half way.

16:00:  Enjoy kayaking and swimming or relaxing on the cruise.

18:00: Enjoy the complimentary sunset party on the sundeck with wine and fresh fruits.

21:00: Retire to your cabin, have a drink at the bar, sing karaoke, join the fishing excursion or play exciting games. Overnight on boat.

16:30:  Return to Sunsea cruise, take time to refresh and relax.

18:00: Enjoy the complimentary sunset party on the sundeck with wine and fresh fruits.

21:00: Retire to your cabin, have a drink at the bar, sing karaoke, join the fishing excursion or play exciting games. Overnight on boat.

09:30: Checking out your cabin and relax on board while our cruise is slowly sailing on the bay.

10:00: Join cooking class demonstration (teaching you how to make our specialty, Spring rolls) on board.

11:45:  Disembark at the harbor, Ha Long city. Take our shuttle bus to return to Hanoi.

For further assistance, please do not hesitate to contact us.

This Sunday market is Bac Ha’s big draw. There’s an increasing range of handicrafts for sale, but it’s still pretty much a local affair. Bac Ha market is a magnet for the local hill-tribe people, above all the exotically attired Flower H’mong. If you can, stay overnight in Bac Ha on Saturday, and get here early before hundreds of day trippers from Sapa start arriving. (Lonely Planet) END_OF_DOCUMENT_TOKEN_TO_BE_REPLACED

Hanoi, a city of lakes, shaded boulevards and verdant public parks – the capital of Vietnam and the city’s most interesting places for tourists are all relatively close to each other, which makes it easy to enjoy the best parts of the city on foot or by cyclo. You could probably explore the Ancient Quarter and visit all the places below in a single day. END_OF_DOCUMENT_TOKEN_TO_BE_REPLACED

Please provide us your flight number, arrival time and your full name.  Our driver will be waiting at the airport upon your arrival, holding a placard with your name on it – and bring you worry free straight to our door step. No hidden cost, no toll fee, no air conditioning charge, etc

In the summer of 1996, fresh out of college, I moved to Ho Chi Minh City for one simple reason: I loved Vietnamese food. At restaurants in Virginia, Maryland and Washington, I’d grown fond of the staples of the cuisine — grilled meats, startling herbs, crunchy vegetables — and particularly of pho, the aromatic beef noodle soup that is Vietnam’s national dish. As graduation approached, I knew I wanted to live overseas, and Communist Vietnam, which had just opened its doors to the West, was the obvious choice. In fact, it didn’t even feel like a choice at all — it felt like destiny.

But as I quickly discovered, liking a cuisine is not the same as understanding it. My first sense of this disjunction came a couple of weeks into my stay, when I settled in for lunch at a downtown restaurant. The manic energy of the streets — the flood of motorbikes, the clanging construction crews, the gawking tourists — had dissipated in the midday heat. Time to eat, and nap and breathe and think, away from the tropical sun. 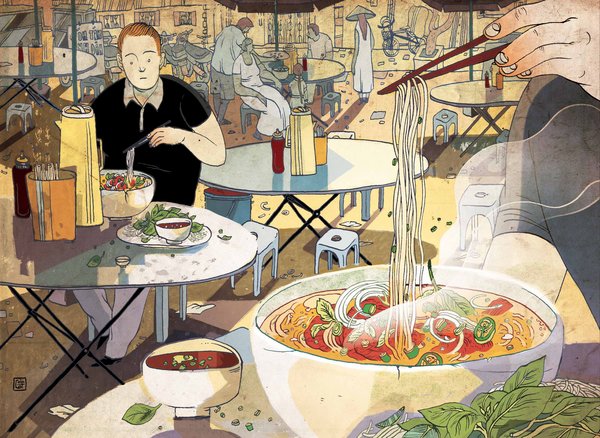 This respite is likely the only reason that I happened to notice the man with the gun. He was across the street, standing in the clear sunshine. He was Vietnamese, in his early 40s. He wore sunglasses. And at his side, he held what I assumed was an Uzi. Then he disappeared into a storefront. If the street had been full of 100cc Hondas, as it had been an hour earlier, I would’ve missed him entirely.

It was an odd sight, and I wanted to ask someone — anyone — about it. Was the man a gangster? A cop? Then my food arrived, and I forgot all about him. I hadn’t known what to order, but something on the menu caught my attention: luon nuong mia, freshwater eel wrapped around sugarcane (held in place with a chive bow) and grilled over charcoal. As I bit, I fell in love. The eel was rich and oily, caramelized from the charcoal heat, infused with the tang of garlic and fish sauce and the sweetness of raw cane. And the cane itself, when I gnawed it, released a burst of sugary juice tinged with the meaty slick of the eel.

This, I knew, was what I couldn’t get back home. This was why I’d picked up stakes and moved to Vietnam. The eel was so great that I wanted to turn to my neighbors and tell them that it justified everything.

But I had no neighbors. I was alone in this restaurant — alone and confused. After all, this seemed to be a quality spot; the eel was proof. So where was everyone? What was I doing wrong?

Those first months in Vietnam were full of such confusion. All around me, I was fairly sure, were amazing food experiences waiting to be had, yet I couldn’t figure out what to eat, how to order, and where, and when, and why. At lunch, for example, I’d often order pho at the renowned Pho Hoa Pasteur. But when I told my students in my English classes, they looked confused. To them, pho was breakfast, not a midday meal. I’d protest: Plenty of Vietnamese people were at Pho Hoa Pasteur! My students would backtrack, perhaps wanting not to contradict their teacher, or just to make me feel comfortable. Oh, sure, they’d say, you can eat any food anytime you want. Khong sao — no problem.

But it was a problem. And I knew its roots. At Vietnamese restaurants in America, all kinds of foods are served together — noodles, soups, stir-frys, spring rolls. But in Vietnam, restaurants are often devoted to a single dish: pho, banh xeo (a rice crepe stuffed with pork and bean sprouts), goat hot pot. Adapting to this was hard. Knowing only a small subset of dishes, and only a few words of Vietnamese, I didn’t even know what to commit myself to. I knew that I should just blindly walk in, point to whatever I saw on other tables, and enjoy the result, but fear and shyness kept me at bay. Is there anything more alienating than not knowing how to eat?

Too often I wound up at the non-Vietnamese restaurants in the backpacker and tourist districts. They were often good: excellent Italian fare, thanks in part to fresh tomatoes and basil; a devoted expatriate clientele demanded serious Japanese; and a century of French colonialism meant that pâté, red wine and onion soup were vernacular dishes. But these meals all reminded me of my ongoing failure to penetrate Vietnamese culture.

After a few months, I moved from my sixth-floor rented room to another on the fifth floor. The new room was larger and air-conditioned, but I took it for the simple reason that it had a tiled patio that was ideal for takeout alfresco lunches.

But what to bring home? Ham-and-brie sandwiches? Thai ground pork with holy basil? On a stroll down nearby Bui Vien Street one day, I spotted a man grilling pork chops outside a com binh dan, an institution that translates as “the people’s food.” Com binh dan are everywhere in Vietnam. For less than a dollar, you can have a plate of rice and a serving of, say, pork belly braised in fish sauce and sugar, water spinach (rau muong) stir-fried with garlic, or a soup of bitter melon stuffed with pork and mushrooms

But com binh dan had never appealed to me. Maybe their folding tables, plastic chairs and worn silverware looked too shabby. Maybe the pre-made dishes, sitting in the humid open air, turned me off. Maybe I needed to read a menu. Or maybe I was just afraid. My palate could handle a challenge, my fragile psyche couldn’t.

When I smelled the suon nuong, or pork chops, however, everything changed. Marinated in garlic, sugar, fish sauce and shallots, they gave off an intense aroma of fat and caramelization, one I couldn’t turn away from. So I ordered to-go — suon nuong on a mound of rice, with rau muong and sliced cucumbers — and carried the plastic foam box to my fifth-floor oasis, where I ate in utter bliss.

The com binh dan around the corner quickly became my go-to spot for good, unpretentious food. Usually, I’d get the perfect suon nuong, but the shop also had squid, stuffed with pork and braised until soft, as well as crispy-fried fish. And a fried egg could be added to anything.

Eating on my patio was nice, but more and more I ate at the com binh dan’s flimsy tables, noticing how other customers ate — with chopsticks, with fork and spoon, or with a combination. I studied the way they prepared dipping sauces, either by filling dishes with dark fish sauce and a few shreds of red chiles, or by pouring nuoc cham, a mix of fish sauce, water, lime juice and sugar, from the plastic pitchers placed on each table. (I’d thought it was iced tea — whoops!) People ate without much ceremony. This was good cooking, but it was also a refueling stop. As I watched and copied them, day after day, I didn’t even realize that, for the first time, I was eating like a regular person.

Nor did I realize that mastering this one meal would have collateral effects. Now that I’d locked down lunch, I could eat breakfast and dinner however I wanted. No longer did I have to feel guilty about starting the day with black coffee and fresh croissants; in a few hours, I’d be feasting on pork chops.

I could also experiment at dinner, testing dosas at the new South Indian restaurant, partying with friends in the Siberian Hunting Lodge, or feasting on braised snails and grilled mussels in a converted auto garage near the Saigon River. Whether these meals turned out delicious or dull, authentic or artificial, I knew that the next day I’d be eating a people’s lunch.

There was, however, one casualty of my growing cultural adeptness. Now that I better understood lunch, the restaurant that served sugarcane eel no longer fit into my eating life — by then I knew it was not a lunch spot, and come dinnertime there was so much else to explore. I never returned. The luon nuong mia, so fixed in my memory, seems like a heat-induced hallucination, almost as illusory as the man with the Uzi. Except it was all real, as real as the charcoal smoke that still billows forth from the com binh dan on Bui Vien Street, on a thousand other streets throughout Saigon, and wherever regular folks gather to eat.